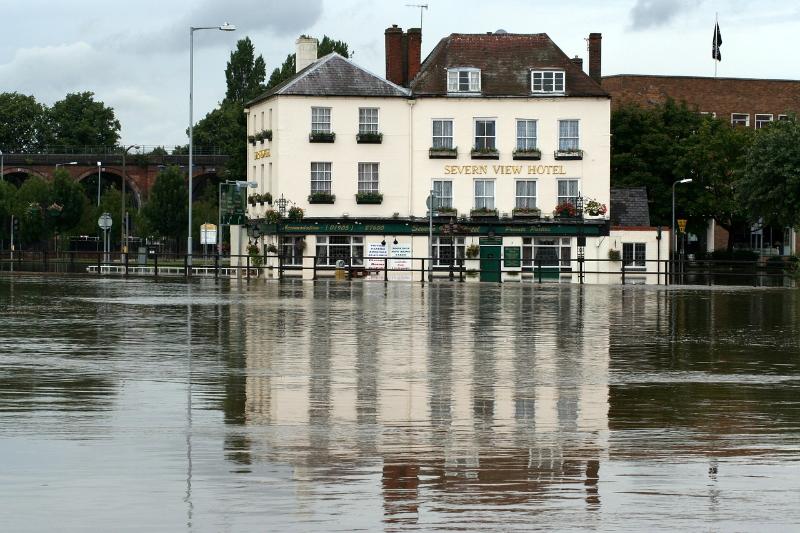 Front gardens in the battle against urban flooding

Recent storms in the UK have highlighted the vulnerability of many areas to high levels of rain.  Whilst research suggests climate change will result in hotter, drier summers in the UK, it has also warned the rain which punctuates this heat is likely to fall in heavier bursts.  The Association’s Technical Officer, Owen Baker, explores the issue more closely and how our green spaces and play a part in mitigating flooding in urban areas.

In addition to the challenge of adapting to climate change, increased development of greenfield land has the potential to increase the rate of surface water runoff.  Surface water runoff is defined as the flow of water on the ground surface when excess rainwater falls and can no longer infiltrate the soil.  This can occur naturally when the soil is saturated but, as commonly found where development has occurred, when impervious surfaces such as traditional pavements and driveways have been installed.

To prevent flooding, it is necessary to reduce surface water runoff rates and match – as closely as possible – that of predevelopment rates.  Without this management, flooding is likely to occur in any area, but particularly in urban areas where there is a higher concentration of development and surface water runoff is more likely.

Together with amenity planting and greenspaces, gardens attached to domestic homes in urban areas have the potential to play a key role in reducing the severity of flooding during storm events by reducing the speed and volume of water flowing directly into public drainage systems and watercourses.  Although individually small, research suggests domestic gardens contribute a significant proportion of land in towns and cities; up to 36% of the total urban area and up to 63% of urban green space.

Whilst generally smaller than the rear garden, the front garden of urban properties can also play a key role in reducing runoff.  The reality, however, is that the front gardens of many houses in urban areas are paved over for use as a driveway without any mitigation.  Research over a 20-year study period (1991 – 2011) suggests impermeable surfaces in domestic front gardens has increased by 22%.

A 2016 study by Heriot Watt University revealed a typical front garden with no impermeable paving was found to produce no runoff in response to both 1 in 5- year and 1 in 50-year storm events.  The addition of a small area of impermeable surface resulted in runoff.

The same research paper suggested a typical front garden in London is more likely to generate higher runoff volumes than cities in other regions due to the higher rainfall intensities applicable to the south-east.  For example, the current 1 in 5-year event in London is equivalent – in terms of runoff volume – to a 1 in 50-year event in Edinburgh.

Predictably, forecasted increases in rainfall intensity will have the effect of increasing runoff from front gardens throughout the UK, which means the contribution of paved front gardens to the overall surface runoff volume will also increase.

Reducing the surface area of impermeable surfaces in front gardens in urban areas is not straightforward, given the trend for car ownership and desire to park on a driveway.  Whilst planning regulations have been changed to reduce further loss of permeable surfaces and encourage consideration of drainage, there is evidence these are not enforced, and there is no legislation to target the gardens that have already been covered with an impermeable surface.

Educating homeowners about the important role front gardens can play in the urban landscape in terms of rainwater management and providing them with advice on how to minimise the impact of any changes they make is likely to present the most reliable solution at present.

Financial incentives may also play a role in encouraging homeowners to consider how they manage rainwater; aside from the likely effect of urban flooding on insurance premiums and property prices, the Water Services Regulation Authority (Ofwat) now requires domestic water companies to reduce their sewerage charge to property owners (referred to as a surface water drainage rebate) where no surface water from a property enters a sewer.  Some European Union countries have adopted policies where homeowners are charged for the removal of rainwater from their property, encouraging more careful management of water.

Correctly specified and installed drainage systems can ensure development occurs at any scale without increasing the risk of flooding.  Sustainable Drainage Systems (SuDS) refers to surface water management that considers a range of factors including water quantity, quality, biodiversity, and amenity.  Techniques can be applied to individual driveways so that homeowners can have a driveway in place of their front garden without significantly increasing surface runoff from their property.

The range of products available from Association Accredited Suppliers to domestic and commercial customers has increased significantly over recent years, meaning non-permeable paving products can be used in conjunction with rainwater harvesting systems and infiltration tanks to achieve greater infiltration of rainwater.

Of course, the success of sustainable drainage systems relies on designers advising clients of the benefits and contractors installing them correctly.  When constructed correctly, they offer the benefits of traditional hard surfaces without the risk of increased surface water runoff.  Maintenance requirements are minimal which means, at the very least, the client will contribute to combating flooding in their local area and – depending on the system chosen – may also benefit from a sustainable source of water for use in the garden.

Over the coming months, the Association will work with Accredited Supplier, Designer and Contractor members to run a series of webinar presentations to outline how to design, specify and install sustainable drainage systems.