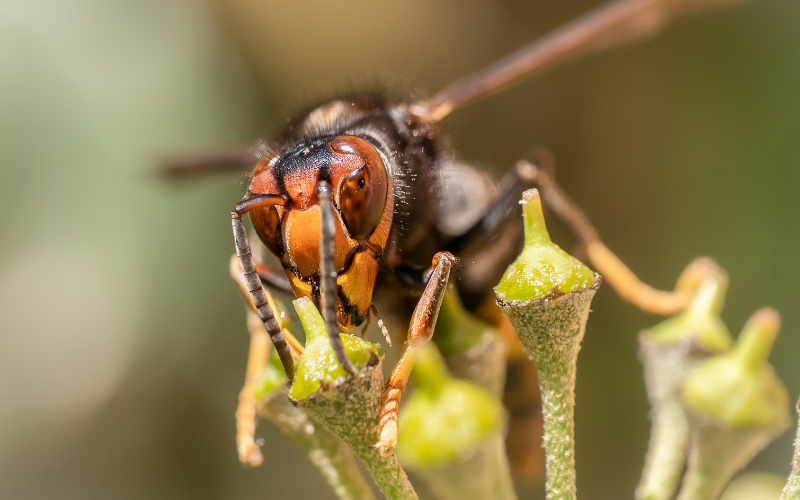 Whilst landscape professionals cannot be expected to memorise all pests and diseases present in the UK, awareness of the most common threats, together with symptoms associated with these, can serve as a useful first response mechanism which will benefit both the organisation and wider environment.

Notifying plant health professionals of the presence of Asian hornet, Oak processionary moth, and Xylella fastidiosa can help in the fight against pests and diseases in the UK, so please familiarise yourself with the symptoms and the notification process.

Ash dieback was first identified in the UK in 2012. The disease is well established throughout mainland Europe, where it is responsible for losses of commercial and amenity tree planting.

Spread by a fungus called Hymenoscyphus fraxineus, the disease is often simply referred to as ‘ash dieback’ due to the symptoms on infected trees: leaf loss, crown dieback and bark lesions.

Once infected, trees are likely to die either as a direct result of the disease or will succumb to other diseases.  Three tree and shrub species in the same family (Oleaceae) as ash, including mock privet, narrow-leaved mock privet and white fringe tree are also susceptible to the disease.

Ash dieback has now spread throughout most of the UK, and its effects on host trees should be considered in relation to the safety of stakeholders and long-term environmental impact of losing Ash trees from the landscape.

The Asian hornet is a highly effective predator of insects, including honey bees, flies, caterpillars, aphids and bugs.  Evidence suggests Asian hornets systematically attack bee colonies and have the potential to cause significant loses.

The Asian hornet was first sighted in the UK during 2016. Whilst the UK is still free from the Asian hornet, the risk remains high, particularly in the south of the UK with its warmer, milder climate.

Despite the risk to native insects, the Asian hornet does not pose a greater danger to people; it is not aggressive unless provoked, although can sting. Accidental introductions of Asian hornet via the landscape supply chain are a possibility, and our members are encouraged to remain vigilant and report any sightings via this link.

Oak Processionary Moth (OPM) was accidentally introduced in England in 2005 and is now established in Greater London and surrounding counties in the south of the country. Even with intervention, it is likely OPM will spread to new areas of the United Kingdom over coming years, which raises concerns regarding the societal and ecological benefits historically provided by Oak trees, as well as health risks to stake holders.

The caterpillars build nests on oak trees and eat oak leaves; in large numbers they can cause some defoliation. This alone may not cause the death of a tree, but it can increase its vulnerability to other stresses. Earlier in 2022 the Tree Council released a free toolkit, which provides a wide range of information from identification to management and control.

Pine processionary moth (PPM) was intercepted on a small number of imported pine trees earlier in 2022 by Defra inspectors. Although there remain no established populations of PPM in the UK, we urge members to be vigilant for signs which may indicate the presence of PPM on pine and conifer plants in the UK – particularly when new specimens are planted. Pine Processionary Moth (PPM) can cause affected trees to lose their leaves, negatively affecting their growth, and has the potential to cause tree mortality, particularly in young plantations. As with oak processionary moth, larvae and caterpillars also pose a risk to human and animal health as they are covered in tiny, irritating hairs.

Defra urge stakeholders to report symptoms to them immediately, via the TreeAlert webpage.

Whilst Xylella is not yet established in the UK, the consequences of the disease are so severe that recognition of the symptoms are highly relevant to the landscape industry.

Xylella fastidiosa, more commonly referred to as Xylella, is a bacterium which causes disease in a wide range of plants including many shrubs and herbaceous plants, olive and several species of broadleaf trees. Common symptoms of Xylella include leaf scorch, wilt, die-back and plant death. There is no known cure for the disease.

The challenge associated with managing the spread of Xylella concerns its long latency period, which means infected host plants may be transported into non-infected countries such as the UK without showing any symptoms. Research suggests there is a higher risk of Xylella with olive, almond, lavender, rosemary, coffee and polygala plants.

The trade and public are asked to look out for symptoms and report cases which cannot be explained by factors such as frost damage, drought or other common pests and diseases, to the TreeAlert service.

Phytopthora ramorum may also be referred to as ramorum blight or sudden larch death. It is a fungal-like organism that may affect English oak, sessile oak, sweet chestnut, larch, beech, sycamore horse chestnut, cherry, ash and birch, and usually leads to the death of the tree. Phytopthora ramorum is present throughout the UK but most severe in the west. Symptoms include a blackened base of the leaf near the petiole and along the midrib of the leaf, withered and blackened leaves or needles leading to dieback of the outer branches and areas of black “bleeding” on the trunk.

Although not established in the UK, Asian longhorn beetle has been intercepted a number of times in the UK at points of entry by plant health officials and in the wider environment following reports from members of the public. These findings are usually single beetles associated with imports of products in wood packaging material for example stone from China. Asian longhorn beetles may attack any tree and live in the tree trunk and branches causing serious damage that will kill the tree. Exit holes from adults emerging are around 10mm in diameter and found on the trunk and branches. In living trees the most obvious signs of damage are circular holes in trunks or branches and adult beetles usually appear between July and October. Adult Asian longhorn beetles are distinctive; Adults are 20 to 40mm in length and their antennae are at least as long as their body.

Anyone finding beetles should isolate them (preferably in a sealed glass jar) and contact the PHSI on 01904 405138 or planthealth.info@apha.gsi.gov.uk