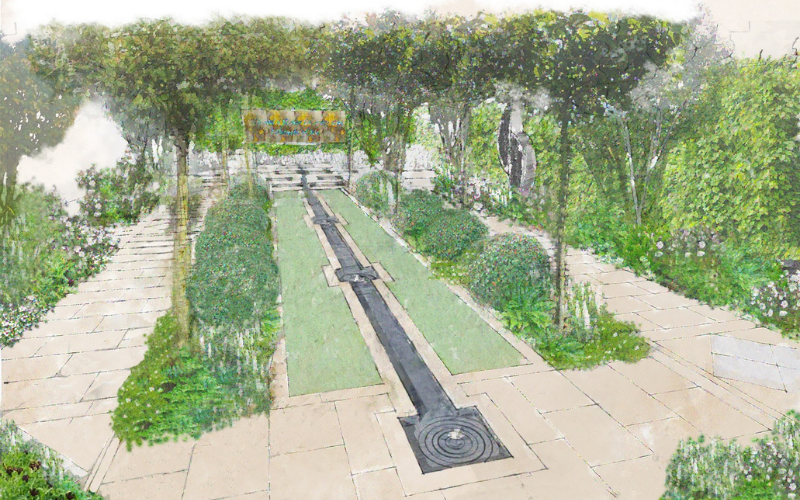 The epic task of building an RHS Chelsea Flower Show main avenue garden has begun (Tuesday 3 May). Joining the planting team on the final two days are four Perennial trainee gardeners from the charity’s Leeds and West Suffolk gardens, which open to the public to raise funds, alongside the Laskett in Herefordshire.

They and 50 plus people have just 18 days to turn a 22 metre by 10 metre space into a forensically perfect garden at the world’s most famous flower show.

The garden is packed with Richard Miers design hallmarks. It is structured, elegant, and classically contemporary, in a palette of green with soft white and plum undertones. Trees and shrubs include flat-topped hawthorns, multi-stemmed Persian ironwood, yew topiary and Portuguese laurel, with hornbeam hedging. There is also a central rill and paving and bespoke seating and sculptures.

Carrying a ‘With Love’ message to the horticulture industry, the garden’s main avenue appearance is a first for both the 183-year old charity and the designer. They hope it will raise awareness of, and support for, the free information, advice and support Perennial provides people in horticulture and their families.

Gary Bean and Jason Gotts are based at Fullers Mill, West Stow. Gary, 36, began his apprenticeship five years ago and is expecting his task at RHS Chelsea to be very different to his day job. Having only watched the show on TV, Gary says he’s grateful for the opportunity to get hands-on and behind the scenes.

Jason, 41, is eight months into a trainee position with Perennial, after starting as a volunteer. It’s been his goal to work on an RHS Chelsea show garden having visited the show. Jason is interested in garden design and is keen to learn from Richard.

Kate Holliday is a month into her job as a trainee gardener at Perennial’s York Gate garden, where she also volunteered, and following a career change. The 41-year-old studied horticulture whilst working full-time. Kate says this is a unique opportunity to experience the hard graft and skills that go into making an RHS Chelsea show garden. She’s also looking forward to being part of team and playing a small role in making an impactful garden for people to enjoy.

Joining Kate from York Gate is Tom Nicholls, who also swapped careers to be a trainee gardener. Three years into the role, Tom, 36, will travel to RHS Chelsea from a study visit to Sweden where he is learning about naturalistic gardening from expert Peter Korn. Like Gary, Tom says he has only ever experienced the flower show through BBC coverage and is keen to find inspiration from all the gardens whilst working on one of the largest plots on main avenue.

The Perennial Garden ‘With Love’ echoes Richard’s belief that gardens are a gift of love between those who create and nurture them and those who visit and enjoy them. Adding,

“I’ve been planning this garden for two years and I’m grateful and excited to see it coming to fruition. It’s a privilege to be part of an organisation that gives something back to our horticultural family of growers, designers, gardeners, landscapers and grounds staff.”

“this beautiful garden represents the very best of horticulture - art, craft, skill, collaboration and love are all present in abundance. We are very excited about how powerfully it will reach those who need our help. A show garden at the world’s greatest flower show is also a unique way for us to reach an audience of supporters who understand the importance of building better futures for those who work in the industry."

A virtual walk around the garden can be found here