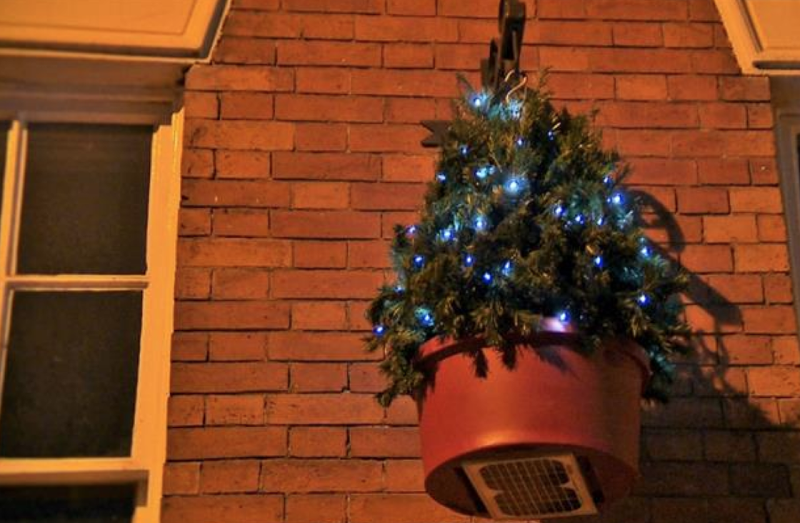 The news comes from the country's largest provider of plant displays, Plantscape, which has seen sales of its cost-effective alternative to traditional yuletide offerings double since 2015.

The company, which has been providing floral displays to the public sector for the past 16 years and solar-powered trees for a decade, is anticipating even greater interest in its products as councils wise up to the financial, energy saving and hassle-free benefits of a new style of festive illumination.

Plantscape's operations manager Pete Halls explained: "We started providing the trees back in 2007 to offer councils a way of decorating their streets for Christmas without incurring the cost of erecting wires and electricity, which can run into tens of thousands of pounds. In fact, the average cost of a traditional Christmas lighting display, including insurance, is around £40,000 - with ours coming in at a fraction of that.

"In addition, there's no need to pay for electricity and, because they don't need to be wired up to the mains, the trees can be installed almost anywhere which means places which may previously not have been covered by a traditional display can now be illuminated.

"Added to that, councils using our hanging baskets and lamppost planters will already have the Christmas tree mounting brackets in place, which saves time and money when we come to swap the summer displays for the winter ones.

Councils and Business Improvement Districts opting for a solar-powered festive season come from as far afield as Oban and Dunlop in Scotland, Hythe on the South Coast, Clacton in the East and Cornelly in Wales, with more than 2,000 on display countrywide.

For some, the choice was between facing a dark Christmas or plumping for the solar option, as the Clacton Town Partnership's Lisa Andrews explained.

"The use of solar lighting in Clacton-on-Sea has resolved a big problem as the local council has been unable to fund replacement electrical fittings on our lampposts and without this solar solution, Clacton may well have been without Christmas lights at all."

In Oban, which has enjoyed the solar powered trees for the third Christmas running, the display plays a vital role in helping the local economy, as Andrew Spence, chief executive of BID4Oban, explained.

"Initially I was extremely sceptical about the prospect of solar-powered Christmas trees because we get so little daylight, but they give us a display for five hours and have been extremely successful over the past few years.

"They help us to light up streets where we haven't got the infrastructure for traditional decorations and where we couldn't afford lights.

"The switch-on is one of the single biggest days in the retail calendar and it allows us to keep people in the town for longer, so having a good display is hugely important and the solar-powered trees are a vital part of that."

Cornelly Town council clerk Dawn Evans explained: "The trees were a lovely addition to the festive display at Cornelly and Mawdlam. They were appreciated by young and old.  Many positive comments were received on the beautiful display they provided when lit up during the December evenings."