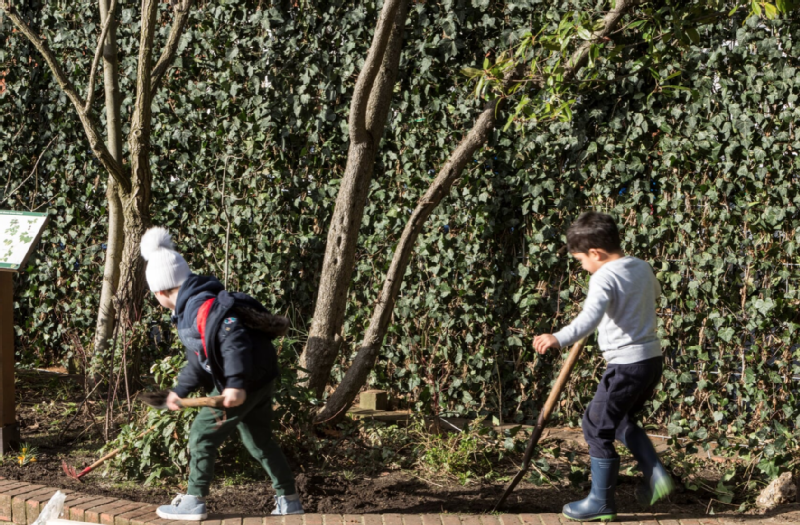 BALI Registered Affiliate member Mobilane install their Green Screens for a state-funded primary and nursery school in East Dulwich, South East London. Goose Green Primary School is leading the way in its battle against roadside pollution. Striving for improved air quality like many schools across the capital and country, the school has created a 'Green Screen' along its perimeter.

The Green Screens
The 2.2 metre high Mobilane Green Screens were installed by volunteers, pupils, staff and supporters, including the Friends of Goose Green School (FOGGS). This is one of several green screen installations completed at schools in the capital and follows a similar project at a Lambeth school last Autumn as their community fully embraced Lambeth’s Clean Air Week and similar pollution-reducing goals.
“The Big Dig”
Fully backed by an eager brigade of over 100 supporters from FOGGS members, parents, children, community and partners, the screen and surrounding beds sprung to life over the 3-day period, as everyone rolled up their sleeves and dug in to create the stunning green expanse. In the relative peace and quiet of the half-term break, the team juggled the lifting, fixing and positioning of the screens. All this whilst keeping the children entertained and with a constant flow of tea and refreshments!
“A project that will benefit the whole community” – Kimberley Hickman, Project Leader, FOGGS
Kimberly Hickman, Green Screen Project Leader from FOGGS, is keen to encourage other schools to follow their lead. The effects of PM10 pollutants are a factor at many, if not all, schools in the urban environment. Kimberley, whose own sons attend the school, one of whom is an asthma sufferer, took a well-deserved step back to admire the team’s handiwork when the screen was complete. She said: “This is not just for the school, it’s a project that will benefit the entire community, so we think it’s important to involve as many people as possible. We’ve been thrilled by the enthusiasm shown by local residents and businesses – it shows what can be achieved when everyone pulls together.”
Greener City Fund
Initial funds raised by the FOGGS members through a community engagement programme received a major injection in January 2018 from with a £12,000 boost from the Mayor of London’s Greener City Fund Grant. The grants are one element of the Mayor’s £9 million Greener City Fund, which aims to create and improve green spaces and encourage tree planting and management across London.
The finished screen
Bursting with ivy, the end result is a bold, green statement along the periphery of the school site and playground. The project received regional ITN coverage and was further supported by local councillors, MPs and sponsors who had contributed time, resources and moral support to ensure the project received the maximum chance of funding and potential to get the project completed.  Local sponsors include the Dulwich Society, Winkworth, Suzanne James Catering Ltd and Lightbox London Limited.
“A living testament to the remarkable power of nature” – Simon Wattam, Head Teacher
Simon Wattam, Head Teacher of Goose Green, was overwhelmed by the support, both in the lead up to the successful grant bid and on the green screen installation event itself. “Every child at Goose Green will be breathing cleaner, safer air straight away and the Green Screen will benefit the local community with its aesthetic, environmental and air cleansing properties. It’s also a fantastic educational tool for teachers and parents. A living testament to the remarkable power of nature.”
The Green Screen Project is one of a range of activities that the school promotes, including children of all ages taking part in an eco-warrior programme - recently receiving a TfL 'stars' silver award for their work in promoting walking and cycling to school.
“A model for other schools to replicate” - James Barber, Liberal Democrat Councillor for East Dulwich
James Barber, Liberal Democrat Councillor for East Dulwich also pledged his support during the funding process and the installation.  He stated “I believe [this green screen installation] will become a model for other schools in the area, Southwark and indeed London to replicate this project and help improve their local air quality.”