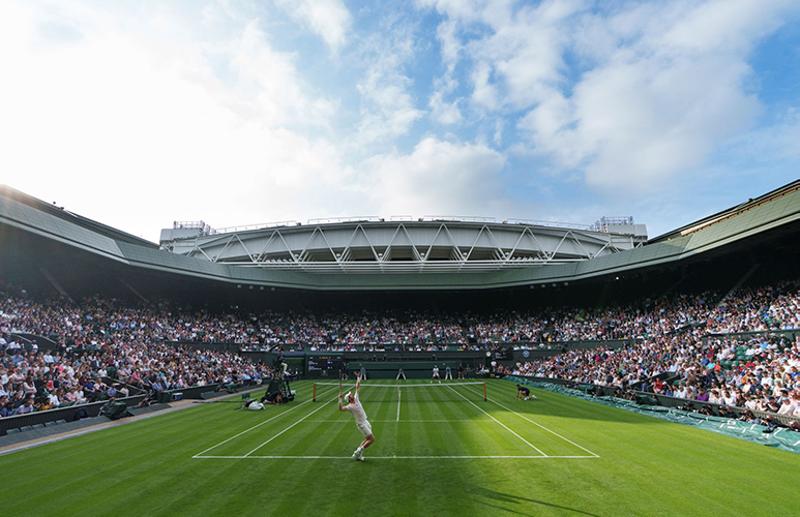 Celebrating an incredible summer of sport

Despite the disruption caused by the onslaught of the COVID-19 pandemic, over the past few months, we have witnessed a bumper celebration of sport. Rescheduled events were run alongside 2021 planned fixtures, providing an exhilarating summer of sporting action.

From Wimbledon, to the rearranged Tokyo Olympics, the Lions Tour, to the reorganised Euro’s 2020, many of us have been gripped to the edge of our seats. And what else do these events have in common? They have all been designed, built, and maintained to the highest possible standards befitting to the world stage by Association members.

Olivia McCullough, Marketing and Communications Manager spoke to Association members for the Autumn 2021 edition of Landscape News, to find out what it takes to keep venues in tip top condition and what challenges the COVID-19 pandemic has added to their quest for perfection.

Game, set, and a perfect match

Maintaining the 42 acres of grounds at the world-famous All England Lawn Tennis Ground plc (AELTC), better known to many as Wimbledon, is certainly no mean feat. Head of Courts and Horticulture, Neil Stubley, leads a permanent team of 15 ground staff which increases to 28 during the Championships. This ensures optimum standards of the 18 Championship and 20 practice grass courts.

Following independent expert research from The Sports Turf Research Institute in Yorkshire, UK, the courts have been sown with 100 per cent Perennial Ryegrass since 2001 (previously 70 per cent rye/30 per cent Creeping Red Fescue) to improve durability and strengthen the sward to better withstand the increasing wear of the modern game. The grass is cut, precisely, daily during the Championships to a height of 8mm and it takes the team around 15 months and nine tonnes of grass seed each year to prepare a Championships’ standard court before it can be played on.

Mark Pyrah, from Accredited Supplier ICL, added; “Our sports turf portfolio of products have played an integral part in helping maintain both the world-famous Wimbledon courts along with providing nutritional solutions to feed the abundance of nursery stock and bedding plants used at the venue throughout the year. ICL have also assisted in the development of a feeding regime for the recently installed living wall on number one court. We have had a close working relationship with Wimbledon and the AELTC for many years and are very proud that it is ICL technical support along with our product portfolio that remains the choice of Champions.”

Goddards and Wembley – the home of football

The England team may not have seized the ultimate EURO glory in the 2020 Final, but their performances throughout the competition both united and excited crowds watching at home and at Wembley.  With fans returning to the iconic home of English Football as the lockdown eased, the spotlight may have been on the team and the results, but at the very forefront of the coverage and build-up was imagery of the stadium and its approach.  TV coverage was superb and afforded us spectacular aerial views of the stadium and walkway as fans arrived. But it was not only the iconic arch that drew the eye, but the Avenue of Champions – Wembley Way – flanked on either side by 70 uniformly perfect extra heavy standard tree pairs of 40-50cm and 60-80cm girth.

Creating The Avenue of Champions

Visitors to national and international sporting and entertainment events are guided along the most famous of thoroughfares by pairs of ‘champion’ tree species.  The design, a 2017 public realm competition-winning submission, was translated into the stunning esplanade by Association members and Accredited Contractors Goddards. With a project team headed by Goddard’s Managing Director Peter Bassett, the avenue was completed in three phases. The final planting continued throughout 2020, completing in June 2021.

Inspired by a Kew Gardens masterplan theme, the avenue is formed of alternating pairs of ‘champion’ species from around the temperate world. Step out from the underground station through walnuts and sweet gums from the Americas; leap across the Atlantic into field maples and limes and forwards into Europe through UK native varieties; head down into Southern Europe through Turkish hazels, oaks and Caucasian wingnuts; at the foot of the Olympic Steps to be greeted by Asian varieties like Zelkova and Katsura.  The visual effect of the changing foliage of these throughout the seasons is breath-taking, with gingery aromas, crown shape, foliage and bark contrasts along the way.

The intricacies of tree selection and tagging were conducted by a team-wide collaboration with Goddards, choosing and tagging the mirrored pairs from three specialist tree nurseries across Europe. Airpotted at least a year prior to planting, this ensured maximum visual impact, minimal root shock and impressive girth and canopy growth in their early years.

Goddards managed the transport, scheduling and delivery of the trees in each phase impeccably, negotiating tight timeframes, tight site regulations and tight access restrictions. Trees in the later phases were held at the company’s own nursery to ensure continuity of supply throughout Brexit and COVID-19 restrictions.  Working with engineers, consultants and contractors, the landscape team applied the highest level of landscaping excellence to pull off the millimetre-aligned placement, securing and planting of each 4-tonne tree into its 30 cubic metre pit using an 80 tonne mobile crane.

The landscape team contended with daily, weekly and pandemic-sized interruptions with a continuous flow of events, visitors and other contractors accessing the amenities at the shortest notice.

Right down to the finishing touches on each cast-iron tree grille marked with Latin name plate and longitude source, the avenue is a magnificent example of tree planting expertise. The trees signpost the best pedestrian route from Wembley Station to the Stadium, controlling crowds and partnering with lighting and signage to create a stunning overall visual effect from every viewpoint and a global longitude-by-longitude journey across the arboricultural landscape.

Tee-ing off on the perfect course

Maintaining the greens at golf courses is a challenge for even the most experienced greenkeepers and that’s before you add in the extra hurdles of a global pandemic and the impact of climate change. Paul Larsen, Head Greenkeeper at Royal St. George’s, home to The Open Championship gave Landscape News a fascinating insight into how he and his team of 15 maintain the iconic sporting venue, and how they have adapted in the face of COVID-19 related obstacles in managing the Site of Special Scientific Interest in keeping with its natural surroundings.

Over his ten years at Royal St. George’s one of the greatest challenges for Paul and his team has been managing the impact of climate change.

“Since 2018 we have experienced particularly extreme changes in the weather conditions which has added a layer of complexity to our roles. We have witnessed extremely hot and dry summers coupled with exceptionally wet winters.  Marrying the two together comes with its challenges as we continuously strive to uphold the very highest standards for our members and the public. Ultimately, the course has to consistently meet the quality expectations all year round despite the problems that we can encounter due to the weather” explained Paul.

The team have counteracted some of these challenges whilst also considering how to positively impact the natural surroundings and habitats. A reservoir was built at the Kent course in the winter of 2018, to help maintain the water system and to store water. Sand scrapes and dune slacks have been maximised to not only hold water, but to create extremely valuable habitats for mining bees, digger wasps and rare beetles. Paul and his team have worked tirelessly to manage the Site of Special Scientific Interest, assessed to be favourable by Natural England, by focusing on maintaining amenity areas and leaving the rest in sync with its natural surroundings and growing grasses native to the area and bringing in wildflowers.

And how did the COVID-19 impact the team?  During the first UK lockdown Paul’s team was reduced to a skeleton team of five to carry out essential maintenance work and he was thrilled to welcome the team back ahead of a golf boom. Paul’s work with a number of Association Accredited Suppliers including Toro, ICL, and Barenbrug has been a constant and played a key part in improving quality on course.

Barenbrug UK, has worked closely with Paul for a number of years and their grass seed strategy has seen huge benefits on the course. Yvonne Hargreaves, Brand Marketing Manager, Barenbrug commented:

“Barenbrug is proud to have a long-standing relationship with Paul and his team at Royal St George’s. We have increased the Fescue grass population on the course, specifically over the last couple of years to grow the levels of Hard Fescue on the fairways, to raise drought tolerance following the summer of 2018. The fantastic condition of the course during The Open is testament to the hard work of Paul and his team.”

Andrew Pledger the local Areas Sales Manager at Accredited Supplier ICL has worked closely with Paul since joining the team in October 2018, having previously been a Head Greenkeeper himself for fifteen years. Andrew also volunteered his greenkeeping services during the recent Open Championship at Royal St. George’s and continues to provide research-based product solutions to Paul and other East Anglia based golf courses on behalf of the organisation.

From football to tennis to golf, it is clear the passion attached to sport reaches much further than the game itself. Preparing and maintaining these world-famous grounds is just as much a labour of love and display of expertise and teamwork from the hard-working teams behind these iconic venues.