Heracleum mantegazzianum, also known as giant hogweed, is now widespread in lowland Great Britain. It grows on moist, fertile soils and, in favourable conditions, can grow to a height of 5 metres. The leaves may also grow very large; up to 1.5m wide. Giant hogweed is able to self-fertilize and reproduce entirely by seed. A single plant produces in the region of 20,000 seeds which are dispersed by wind, water and humans. Most seeds germinate the following year, although only 1% of seeds are able to survive in the soil for more than 3 years. After a mature plant flowers and produces seed, the entire plant dies. A dead plant may be identified during the winter from tall, hollow stalks which remain upright. 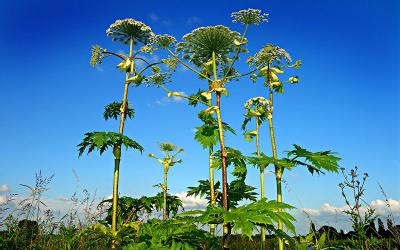 Giant hogweed produces phytotoxic sap which, when in contact with human skin and combined with UV radiation, can cause serious burns. For this reason giant hogweed should be considered a hazard to humans and removal undertaken with extreme caution and prior consideration of the risks. Giant hogweed should also be regarded as a hazard to wildlife; during summer months giant hogweed commonly forms dense stands, which displace native vegetation and reduce wildlife habitats. During the winter however, when the plant is dead, erosion of riverbanks is likely to be accelerated due to lack of vegetation.

Giant hogweed is subject to legislation which aims to prevent the release of specific plants and animals that have the potential to cause ecological, environmental and socio-economic harm. The legislation that serves this purpose is the Wildlife and Countryside Act 1981 (Section 14) and the Environmental Protection Act 1990. A review of the relevant section of the Wildlife and Countryside Act is outlined in this document.